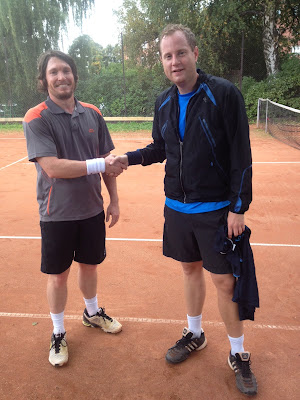 Fagerheimen.tk will be back with more comments and pictures from the trophy ceremony.
kl. 18:01

Craig Murray's bid to become the first ever Australian winner at the FTK Championships stays alive after battling past first seed Knut Bjorheim in a scintillating semi final.

Bjorheim came out firing at court one yesterday, breaking Murray`s serve at the first opportunity, moving 2–0 up before Murray began to find his rhythm in a long service game.

– I thought his [Bjorheim's] returns were unbelievable, at times it felt like a disadvantage to serve. Fortunately I managed to cope with it a little better at the decisive stages of the match. I´m really, really happy with my performance, Murray told Fagerheimen.tk in a court side interview after the match.

At five all in the first set the third seed succeded in breaking Bjorheim's erratic serve for a second time, and then to serve out the set in convincing fashion.

The second set started as the first, with Bjorheim breaking Murray´s serve – twice – to move 4-1 ahead.
– He played ridiculously well at the start of the second, I just tried to hang in there, Murray admitted.

Murray's never say die attitude paid off, and as everybody expected a third set, the top seed's game fell apart yet again, inviting Murray back into the match.

The set had to be decided in a tie break. After two and a half hours Murray managed to close out the match, taking the tiebreak 7-1 as the dusk threatened to stop action on a beautiful, late summer night in Oslo.

– First of all I want to congratulate Craig [Murray], he did really well and was the better player today, Bjorheim told reporters in a post match conference.
– Your serve didn't seem very reliable today, especially not in the breaker, do you consider this as part of the reason to why you lost?
– My serve hasn't been reliable at all this tournament, that's definitely something we're gonna work on during the winter break. It's been so bad I want to apologise to my supporters. I feel sorry for all I have let down.

– After the doubles final you complained about suffering back pains, how was this today?
– I actually had treatment for it earlier in the day. I don't want to blame my loss for it, but it definitely made me struggle, particularly with the serve. And it only got worse as the match went on.
– And what about the old elbow-injury?
– I don't want to take anything away from Craig's performance, but, just as my knee-, shoulder-, neck-, throat- and ankle-problems, it really made me suffer.

– Your loss today also means you'll be relegated to second or even third place [depends on the outcome of the final] when the next ranking is published in a fortnight?
– Listen, becoming number one was a childhood dream come true to me in the first place. This is something nobody can take away from me. Of course I had hoped for a longer spell at the top, going into the indoor season as number one would be nice... But this is tennis, I just have to work hard every day and do my best to come back.

In the upcoming final, Craig Murray faces former champion Christian Svendsen, who he lost to in the semis last year.

– Playing Christian Svendsen is always a big challenge. Hopefully I can do better this time, Craig Murray said.